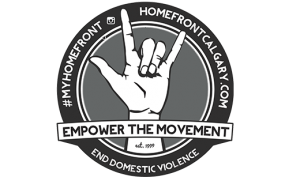 Starting June 2015 many people may have noticed Checker Yellow Cabs with the “I love you” hand sign decal on their vehicles driving around Calgary. At first I didn’t realize what the purpose was, but upon closer inspection I recognized that the decal is a campaign with HomeFront to raise awareness of and end domestic violence. Most people are aware that domestic violence is against the law, but I wanted to talk about the other types of abuse that families and individuals in relationships may face that people may not be aware of.

The most commonly known forms of domestic abuse are physical and sexual, however, there are many other forms of abuse which families and couples may not recognize as they are not publicized as frequently:

Isolation: controlling activities and preventing partner from having specific friends

Minimizing, denying and blaming: blaming others for inappropriate actions and minimizing any wrongful behaviours

Emotional abuse: making partner feel helpless and hopeless and making them feel bad about themselves

If any of the prior stated forms of abuse are prevalent in your relationship, there is support available. Both men and women may identify one of these forms of abuse, as women are not the only ones that suffer from abusive partners. Individuals often think that the abuse is temporary, but rarely in my experience does it end without some form of external involvement. As always the earlier you seek support, the better chance you have to improve the relationship or get out with your self-esteem intact.

Past behaviour is an important variable in future behaviour.

About the Author: Kevin Ruddell

Everyone experiences times in life where they feel that life is out of control. My goal as a clinical psychologist is to help recreate the balance that you are looking for.
Contact Me
Suite 500, 5940 Macleod Trail SW, Calgary, Alberta
(403) 651-0723